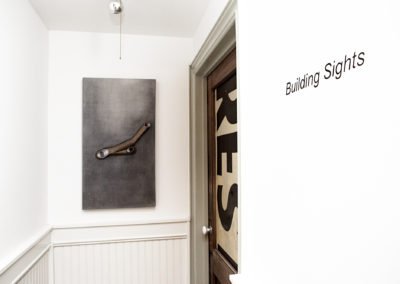 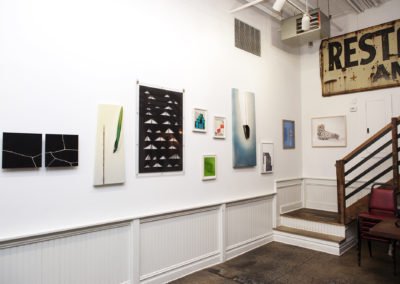 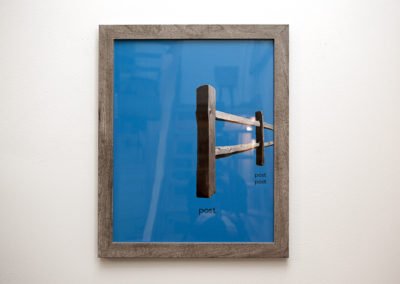 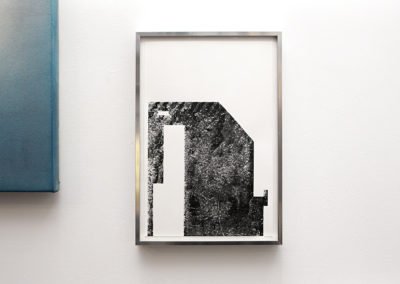 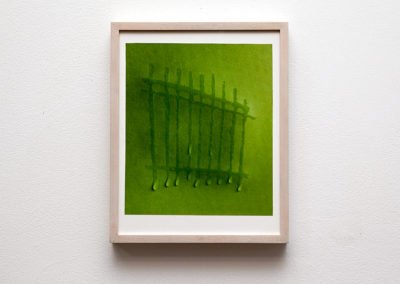 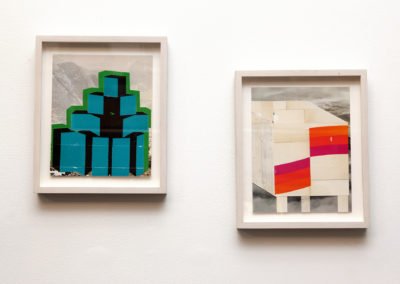 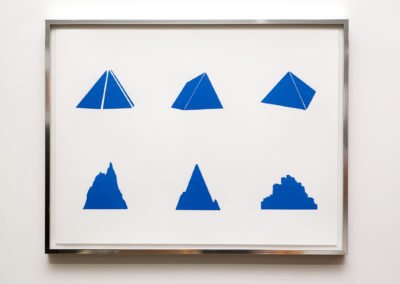 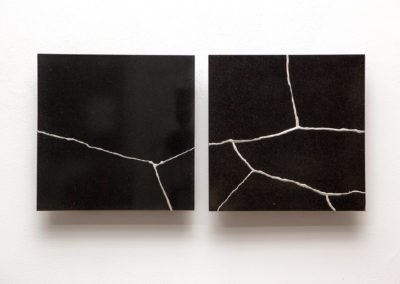 Look around Brooklyn, Every empty lot has hoarding around it and a high rise building going up. Look again and this could be any city. Covered with iron, concrete, cinderblock, stucco and drywall … yet the weeds and trees still push up the pavements.

All of the artists selected for this exhibition presently live in Brooklyn but none are native to NYC. They have migrated here from Italy, New Hampshire, Connecticut, Nevada, and New Jersey. The city and architecture seeps into local psyche and permeates visual practice of these artists. Artworks on view playfully explore building, construction materials, modern architecture vs natural forms and geometry.

Ilaria Ortensi photographed the windows of one of the most uninspired buildings in NYC, then mounted the photographs to wooden blocks in order to “reconstruct” the building into more exciting forms. The two photos on view document the playful re-building of the Manhattan high rise.

Celeste Fichter’s photographs from her series “Sign Language” investigat the relationship between verbal and visual language. In this case architecture creates visual puns and humor to visually represent the “Watergate” political scandal and post post modernism.

Janine Biunno’s works on paper analyze and interpret the built environment of architecture, infrastructure and urban space. She reverses the process of 3 dimensions back to 2 dimensions on paper. You’ll see the spaces in-between, the negative spaces rarely noticed in iconic cable stayed bridges and a print from remnants from architectural models.

Two collages from the ongoing series “The World We Live In” by Matthew Northridge use background photo images from Time Life 1960’s books with the same title. He constructs collages with found material and graphic fragments are cut and rearranged, sometimes several times over, to create structures resembling dilapidated billboards, barricades, and buildings. These architectural structures inhabit the immediate foreground within scenes of wilderness and pastoral countryside. Employing aspects of drawing, collage, and low relief, each installment is a further effort to locate an aesthetic construction within the tight confines of the picture frame, in the process crowding out what little glimpses we have of open space.

A few selections include artwork created with actual building materials. Sarah E. Brook gracefully constructs “natural” forms using folded, bent and sculpted sandpaper embedded in dyed canvases. TJ Volonis reclaims tiles and other discarded building materials when he creates wall mounted Kintsugi sculpture. A traditional Japanese method for repairing broken ceramics with a special lacquer mixed with gold, silver, or platinum. The philosophy behind the technique is to recognize the history of the object and to visibly incorporate the repair into the new piece instead of disguising it. The process usually results in something more beautiful than the original. In this diptych we an abstracted silver horizon line shining in the blackness of mundane black marble tiles often found in renovation of apartments locally.